Jerusalem Book Launch of The Bloody Price of Freedom

Launch of Richard D. Heideman’s new book “The Bloody Price of Freedom” which he wrote to illuminate the link between Terrorism and Antisemitism, and expose the multipronged diplomatic, boycott and terror warfare against Israel and the global Jewish community. You can purchase the book by clicking HERE.

The book analyses the multipronged diplomatic, boycott and terror warfare against Israel and the global Jewish community, providing tools countering the demonization of Israel and anti-Semitic attacks upon the Jewish people. The book addresses the insidious attacks, propaganda, economic, academic and other boycotts as well as the misapplication of international law in the United Nations and elsewhere that has been leveraged against Israel. A special section on the International Court of Justice’s 2004 nonbinding advisory opinion on the construction of Israel’s terrorism-prevention security fence includes detailed illustrative maps.

In opening remarks, B’nai B’rith World Center Director Alan Schneider noted that “Coming after the author’s earlier book, ‘The Hague Odyssey,’ in which he meticulously presented the U.N.’s handling of Israel’s security barrier and the advisory opinion issued by the International Court of Justice in 2004 that found it illegal under international law, ‘The Bloody Price of Freedom’ is another important contribution to our understanding of the system that encircles Israel and tries to strangle it.” 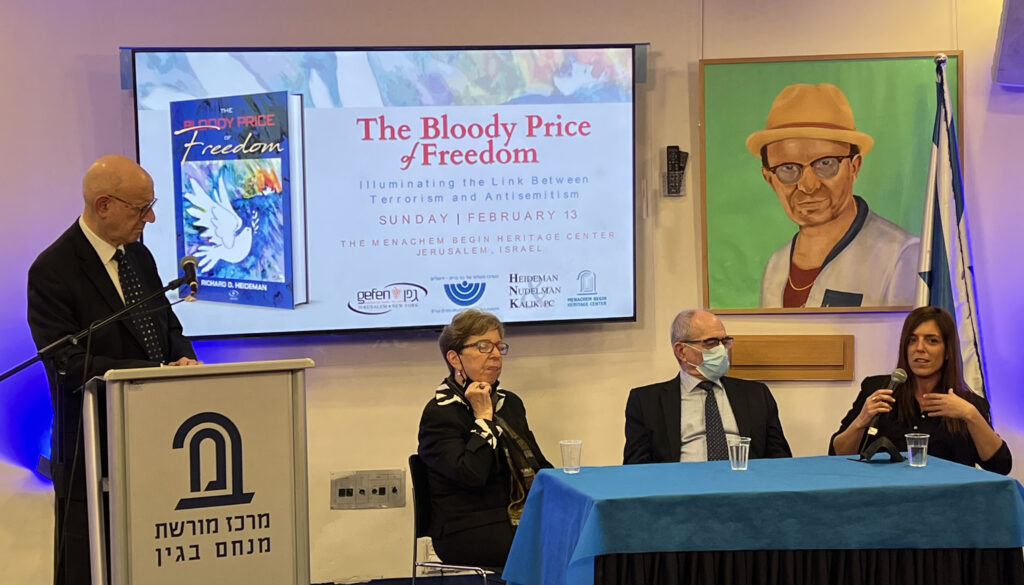 Opening the discussion, Mariaschin said Jews and Israel now face “a perfect storm of anti-Semitism that envelops us globally, coming from the left, the right, and from Islamists and transmitted over social media with increasing ferocity and frequency. So many of the vectors of contemporary anti-Semitism are focused on marginalizing, demeaning, demonizing and delegitimizing Israel and Zionism. Added to all of this is an explosion of Holocaust denial and trivialization, and perhaps worse, the politicization of the Holocaust in international fora.”

Kohn noted that the new book will help to dispel widespread ignorance about Israel and justify its cause also for Israel’s own citizens who are divided on many cardinal issues pertaining to the state’s legitimacy. She also called on Israel to emphasize the many crimes committed by Hamas and other Palestinian factions in their war against Israel.

Kuperwasser said that left-wing radicals are arrayed against Israel and are making inroads into the center-left. To counter that Israel supporters must speak the same language, using appropriate vocabulary to present Israel’s justified arguments and counter the trend toward intersectionality backed by the progressive movement. Because Israel is strong and prosperous, a growing number of countries want to intensify relations, but this has not yet been successfully translated to multilateral fora including the U.N. “The BDS movement is just another arrow in the quiver of Iranian arrows against Israel and it must beware in the face of a cynical world that stands aside as the Ukraine is threatened with invasion,” he said.

Segal argued that Israel is way behind its detractors in the war of narratives and ideas. She said loaded legal terms such as “apartheid” and “annexation” can be successfully used against Israel because their formal meaning is not generally known, also to our own young generation. The Abraham Accords broke the Arab bloc against Israel and offered another voice to the Arab League. 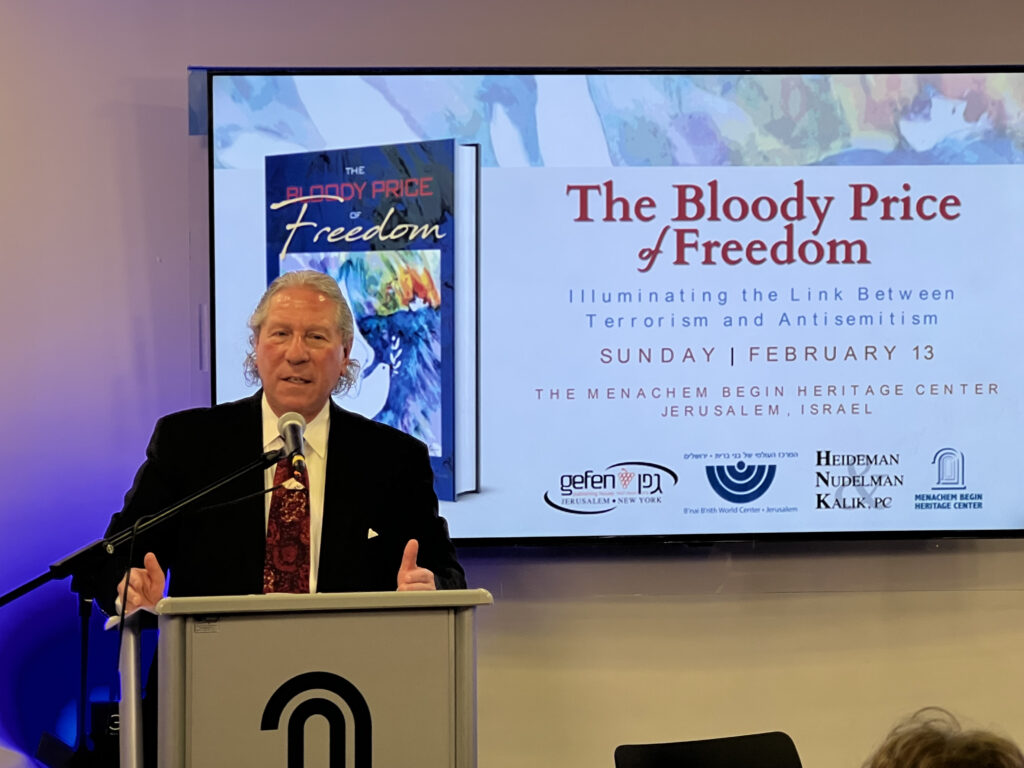 In his concluding remarks, Heideman noted that the Nazi manifesto of 1920 had 20 points aimed at dehumanizing the Jewish people that led directly to the Shoah and the annihilation of millions. Today we hear that “Hitler should have been allowed to finish the job” and young people are believing it and repeating it. In 1944 the Arab League convened and passed a plan for the economic boycott of the Jews in their countries. Israel, Zionism and their supports have faced a conspiracy of painting it as racist, pushed by the Arab League, at the U.N. and by NGOs. This conspiracy and boycott were broken by the Abraham Accords that followed 25 years during which no Arab country established relations with the State of Israel.

“This book was written for the Israeli victims and families of terrorism who lost the fiber and fabric of their families,” Heideman said. “There is a profound linkage between terrorism, anti-Semitism and the demonization of Israel, and the global Jewish community, including in Israel, must work together to illuminate the danger of the repetition of history. Silence is not an option.”