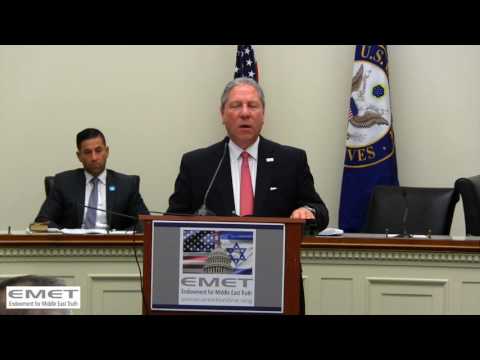 As we reflect on the events of September 11, 2001, it is difficult to look past the tragic stories of lost loved ones. The Israel Forever Foundation recently participated in the annual 9/11 Memorial sponsored by EMET which honored all American victims of terrorism, particularly relevant this year as we grapple with the increase in terrorist activity. Rather than focus on the terrorists and the message they are trying to send, the Memorial reflected on the Americans affected and how we, as the most powerful nation in the free world, must stand together to hold terrorists and their sponsors morally as well as legally accountable.

The Chairman of The Israel Forever Foundation, Richard D. Heideman, who serves as Senior Counsel at the Washington law firm, Heideman Nudelman & Kalik, PC, was invited by EMET to speak at the Memorial, joining Senator Cruz, Congressman DeSantis and Congressman Meadows. Richard D. Heideman, a leader in the field of anti-terrorism litigation, attested to the fact that we have come a long way since 9/11, but we are not finished fighting yet. He urged that we must “put in context the suffering, the pain, the anguish, the loss of the victims and their families who have been torn apart” and that we must work together to achieve for them the justice they need and deserve in order to provide them comfort. He agreed with the message of the event, saying that even today “All too often we concentrate on the terrorists, rather than the plight of the affected Americans.”

Heideman continued, “While the damage caused by heinous terrorist attacks which murder and maim is unrepairable,through the confluence of the legislative branch, executive branch, judicial branch, and attorneys of victims of terror, we must take all necessary steps to support the Victims and cause each perpetrator to be held fully accountable.”

Heideman’s words were echoed by Senator Ted Cruz who said that only the truth about what happens, and the revelation of the truth to the public is able to cut through because “Truth is powerful” as it helps bring us together to heal as a nation and hold terrorist organizations accountable under American law.