Anti-Terror Lawyer Predicts: US Will Pass Anti-BDS Legislation Against EU 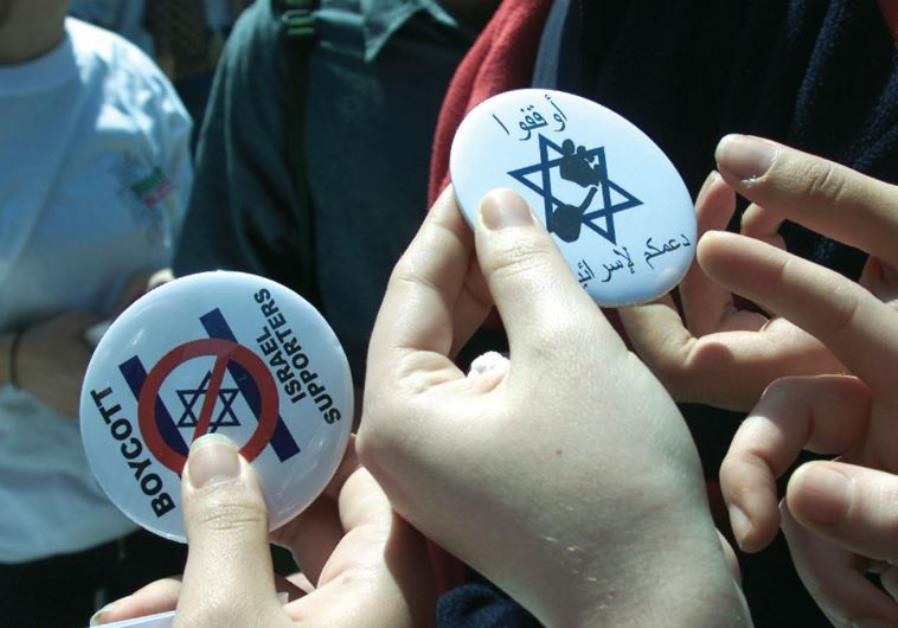 Heideman has been involved for decades addressing Israel issues, anti-Semitism and the boycott, divestment, sanctions campaign in his capacity as international president of B’nai B’rith.

He is not a prophet, but international lawyer Richard Heideman has been inside and around the halls of power in Israel, the US and the UN, as well as on the front lines of anti-terrorism cases in US courts for decades.

So while his predictions may not carry the weight of those of a senior government official, his strong belief that the US will in the near future – even before US President Barack Obama leaves office – pass legislation to take Europe to task for some of its new Israel (or at least settlement) boycotting policies, is nothing to laugh at.

Where does Heideman get his insider perspective on the issue? He was born in Detroit and at a young age was already founding Jewish leadership organizations and serving as B’nai B’rith Youth’s president.

He attended law school, including spending more than two years studying abroad from 1970-1972 at a special Hebrew University program on legal aspects of the Middle East – just as many of the complex issues following the Six Day War were starting to present themselves.

The program was later discontinued and remained dormant for decades, until Heideman helped reestablish it three years ago. He told The Jerusalem Post that, “training young legal minds to understand issues facing Israel and the Jewish people is essential for the future of the Jewish people.”

So far 24 students have applied for the 2016 program, which will feature the International Criminal Court’s founding chief prosecutor, Luis Moreno- Ocampo.

Heideman has been in private law practice in Washington, DC since 1972, but much of his work, especially since 2003, has related to human rights, Jewish terrorism victims’ rights and wrongful death and personal injury cases connected to those issues.

He has sued Libya, Iran, Syria, the Palestinian Authority and major banks for involvement in or financing of terrorism.

In addition, Heideman has been involved for decades addressing Israel issues, anti-Semitism and the boycott, divestment, sanctions campaign in his capacity as international president of B’nai B’rith.

He tells stories of attending a UN conference in Nairobi in 1985 and already facing virulent anti-Semitism, seeing protests with “depictions of Israelis as murderers and blood-sucking dogs” and physical threats, though the conference was nominally about women’s rights.

Heideman attended and spoke at the infamous 2001 Durban conference, which launched BDS, and visited Israel several times during the second intifada. His first major international legal fight was when he filed a brief with the International Court of Justice arguing that Israel’s West Bank security fence – which he likes to call its “international terrorism prevention security fence” – was really an essential self-defense move.

The ICJ eventually handed down a ruling in 2004 declaring the fence a major violation of international law.

But its ruling followed a demonstration by Heideman and supporters, who he recalled “brought a burned out Egged bus, which we parked outside the front of the peace palace at the Hague, and marched thousands of people from the peace palace to the old city hall, where we conducted informal hearings on behalf of Israeli victims of terrorism… before members of the EU and Dutch parliaments.”

This experience was a further confirmation of his views that the “one country one vote” UN and its related international institutions would never give Israel a fair shake. These experiences have led Heideman to conclude that, “we must take the boycott issue much more seriously than we’ve taken it. It’s not just an academic threat – it’s a physical threat to students who are in danger.

“We need a very serious full-court press, standing up, taking action, initiating civil litigation and administrative actions and strengthening US law as relating to the Arab boycott,” he stated.

His big idea, which some other groups and supporters of Israel have also started to campaign for, is for “Congress to let victims of [Israel-related] economic and academic boycotts into US courts” to sue those boycotting them.

He said that the “US in its trade relationships with countries around the world, as well as with the EU, can utilize its international trade power to mandate that companies not discriminate…it can force the EU to change” its negative attitude toward Israel “or enact laws which make it painful to do business in the US because of discriminatory conduct” to Israel.

Asked whether this scenario is realistic, with the EU being a major diplomatic and economic player that could cause economic pain to the US, Heideman admitted that such a confrontation “may not be in the US’s best interests” from a realpolitik point of view.

He added that “the US has been the most democratic country in the world, the leader for freedom, justice, equality and nondiscrimination.

When the Arab boycott was launched, the US stood against it. Members of Congress are ready to stand up, states are adopting domestic legislation, to put some teeth into the law and lots of organizations are becoming involved.”

He explained that to be effective, the legislation would need to empower a large array of federal institutions to take action against Israel-related discriminatory boycotts, including the US departments of Commerce, Justice and Treasury via the Internal Revenue Service.

Further, Heideman asserted that, despite tension and disagreements between the Obama administration and the Netanyahu government, “I think Obama would sign legislation that addressed discrimination against Israeli companies.”

He said that fighting the Israel boycott through legislation would work only if this is accompanied by “a massive effort to readdress the maligning of the good name of Israel and the Jewish people…We need to stand up with strength… Israel like every nation has a right and obligation to defend her people.”