Moving Zionism Forward: A Conversation with the President of the American Zionist Movement 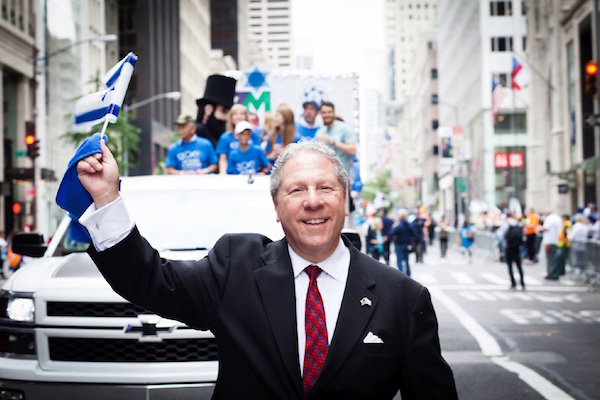 In a New York City bookstore in Brooklyn’s Dumbo neighborhood, far-left, self-described “radicals” gather to discuss “Freedom-Fighting Under State Repression.” Contempt for everything from Israel and America, to capitalism and law enforcement, dominates the conversation. But the most caustic rhetoric is reserved for redefining Zionism.

The movement for Jews to return to their homeland is a racist and genocidal enterprise, according to these the speakers. They fancy themselves as part of a unifying force that brings “social and economic justice” groups together. Yet, as Dr. Martin Luther King, Jr., warned about decades ago, “when people criticize Zionists, they mean Jews. You’re talking antisemitism.”

Israel recently celebrated its victory in the Six-Day War, but to these and other antisemites and anti-Zionists, the Six-Day War and the reunification of Jerusalem are but another chapter in the campaign to redefine Zionism and delegitimize the Jewish state.

One of the more prominent figures opposing these history revisionists is Richard D. Heideman, a Washington, DC, attorney, and president of the American Zionist Movement (AZM).

An affiliate of the World Zionist Organization, the AZM serves as an umbrella organization on behalf of 25 Zionist organizations in the United States.

With Zionism and its history being vilified by some on the Left, as well the traditionally antisemitic “white supremacy” crowd, Heideman — who began his tenure just this year — finds himself facing challenges that will have historic significance.

Right before the Jerusalem celebrations began, Heidemen spoke to the Haym Salomon Center about his new position and its challenges.

“My first goal,” said Heideman, “is to restore the good name of Israel, the Jewish people and Zionism. Because in the eyes of many we have become sullied and that is unfair, undeserved and must be confronted. I am determined to change the dialogue, and issue a strong, straightforward response to the assaults, the insults and the unfair use of words such as racist, criminal and apartheid to describe us.”

Advocating a three-pronged approach that begins with education, Heideman is extremely concerned about young people, whom he believes don’t have a grasp of the history of Zionism and are unable to respond to Israel’s detractors.

Asked about how to reach young people, Heideman’s answer is to go where the millennials and current generation can be found.

Expressing concern about the divisiveness within the Jewish community, the second prong of Heideman’s approach is unity.

Heideman explained that the various Jewish organizations have divergent perspectives from across the political spectrum, and have allowed these disagreements to tear the community apart. He stressed the importance of abiding by civil discourse guidelines adopted by the Conference of Presidents of Major American Jewish Organizations.

“I don’t believe we’ve made enough effort to encourage those on the left and those on the right to coalesce around our commonality. It’s too easy for them to concentrate on our differences rather than our unique similarities that arise out of our faith, our principles, our teachings and our obligation to be dignified and respectful of each other.”

Heideman’s third prong is geared toward impact. He sees the need for the Zionist movement to engage in global advocacy around key issues designed to advance the first two prongs, with the ultimate goal of reminding the world of the rich contribution that the Jewish people, Israel and Zionism have made to civilized society.

While there is no shortage of pro-Israel organizations that promote Israel’s democracy and equality for women, minorities and the LGBTQ community, Heideman sees the need to take and expand the approach implemented by Hadassah — the Women’s Zionist Organization of America.

“I have three grandchildren born in Hadassah hospitals. [Each time I visited] the hospital, the roommates of my daughters were of various religions, various dress — their families were of various races, religions, and national origins. When you walk the halls of Hadassah hospitals, you see as many Arabs and Muslims, as many Christians, as you will see from across the cultural divide within Judaism. It is that demonstration of respect for humankind that is a message that young people will identify with.”

Heideman also sees an important role for Christian Zionists to play, especially when it comes to impacting and changing the image of Jews, Israel and Zionism on the global stage.

“I welcome their support, I appreciate their support and see them as our partners in changing the dialogue and improving the situation, and deterring the continued assault under which we have suffered,” he said.

This article was originally published by Patheos.