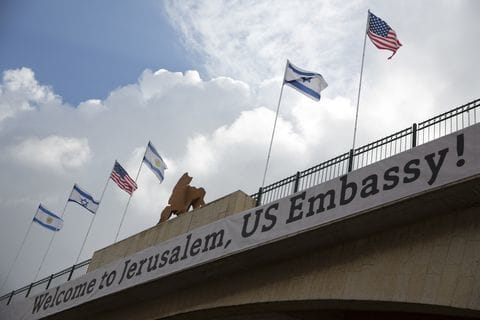 (Monday, 14th May 2018) – Richard D. Heideman, President of the American Zionist Movement (AZM) saluted the official opening of the new U.S. Embassy in Jerusalem, the capital of the State of Israel.

“Today, the work and aspirations of American Zionists are fulfilled with the official recognition of Jerusalem as the capital of the State of Israel and its manifestation embodied in the opening of the American Embassy in the eternal capital city of the Jewish People,” said Richard D. Heideman, President of the AZM, who is attending the opening ceremony. “As American Zionists, the recognition of Jerusalem as the capital of Israel is a foundational issue we have long worked toward and sought to achieve by a United States Administration, and today it becomes a reality. Today, we celebrate the perfect connection of America with Zion as the national homeland and nation-state of the Jewish people.”

“This moment is also historic as it is occurs exactly 70 years to the day when President Harry S. Truman, disregarding advice from his most senior advisors and officials, exercised his right and responsibility to officially recognize the State of Israel, the Jewish State. President Truman’s bold leadership enabled Israel to become a member of the family of nations. President Trump’s recognition of Jerusalem and decision to move the US Embassy to Jerusalem is equally historic and appreciated.”

Heideman continued, “As we applaud this long delayed step by our country we call on all other nations that have diplomatic relations with Israel to now recognize and relocate their embassies to Jerusalem, which is the duly designated capital of the State of Israel.”

Heideman continued “The name of Jerusalem, in Hebrew, means ‘city of peace’. As Jerusalem is home to, and holy to, people of many faiths, the city must now become the ‘crossroads of peace’. This can be achieved when all the nations of the world gather in Jerusalem for peace and
diplomacy.”

Heideman added, “We also call on all offices and agencies of the United States Government to now officially list “Jerusalem, Israel” on all official documents, announcements, maps and passports so that the American recognition of Israel’s capital city will be complete.”

“On a personal note, my wife Phyllis and I look forward to our grandchildren born at Hadassah Hospital having “Israel” added after “Jerusalem” on their US passports as their place of birth.”

The American Zionist Movement (AZM), including 25 U.S. national Zionist organizations, representing millions of Americans, officially represents American Zionists in the World Zionist Organization and works across a broad ideological, political and religious spectrum linking together all those in support of Israel, Zionism and the Jewish People