KALLAH:  A LEADERSHIP LEARNING EXPERIENCE IN JEWISH LIFE AND THOUGHT 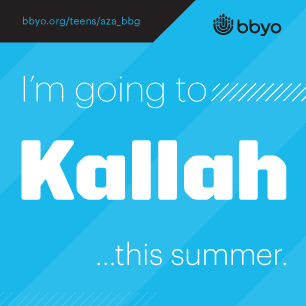 At a time when the world is busy looking back at events in US history that impacted real people in real time, such as the assassination of John F. Kennedy in 1963 and the adoption of the Civil Rights Act of 1964, I have found myself reflecting upon some important activities that affected my own life and personal development.

In 1963, I had the honor of being elected to the key leadership position of Grand Aleph Mazkir in the B’nai B’rith Youth Organization, My responsibilities included overseeing the portfolio of international summer leadership training programs.

Upon my election, I received a call from Dr. Daniel Thursz, z’l, the professional staff director of BBYO’s Summer Leadership Programs, invited my co-chair, Barbara Desow, and me to Washington to begin planning leadership programs for the coming year.  He held the view that the training of young Jewish minds was essential to building a strong future for the Jewish people and for Israel. He urged us to be creative catalysts for change and to think outside the box, with a goal of developing the most effective program of its time, committed to providing excellence in leadership training.

What emerged was the first “KALLAH” of the B’nai B’rith Youth Organization, a seven week program encompassing the three week international leadership training conference sponsored and supported by B’nai B’rith International and held in the summer of 1964 at Camp B’nai B’rith in Starlight PA. Gathering in the leadership village, the hand selected Jewish youth leaders from throughout the world came together as one rather quickly, focusing on leadership, on study, on brotherhood-sisterhood, on service to humanity and on hard work as participants in what was then, and has remained, the most influential Jewish youth leadership learning experience in the history of American Jewish life.

The group leaders were professors from various colleges and communities dedicated to providing the young leaders assembled with the most intensive and important experiences in group interaction, leadership skills development, creative programming and mind-opening focus on the world, the nation of Israel, the Jewish people, our role in society and encouraging each participant to dedicate their lives and families to be the best human beings they could be … committed to tzedakah, to respecting the dignity of all men and women and to indeed helping to make the world a better place for all men, women and children.

KALLAH, celebrating 50 years this summer, has trained young minds from around the world … individuals who have not only gone on to great accomplishments, but more importantly, KALLAH has produced Jewish leaders who have helped secure a better future for Israel and the Jewish people.

Lives have been impacted by those who participated and by those who came to Camp B’nai B’rith to share, to teach and to encourage young minds to expand their thinking and to not only dream the impossible dream, but to take the steps necessary to turn dreams into reality.

I met my wife, Phyllis, at Camp B’nai B’rith, and together continue to share a meaningful life of commitment to family, to Israel and the Jewish people.  Our daughters, Stefanie, Elana and Ariana, have each attended the KALLAH program.  All whose lives were touched by this outstanding program are grateful for the experiences we shared, the lessons learned  and the commitment instilled in us to give back to our community and our fellow men and women in meaningful and sensitive ways.

During KALLAH, I remember Danny Thursz  introducing us to a shy, gentle, thoughtful young man who he asked us to listen to … to hear carefully … and to commit ourselves to sharing with others the lessons learned from the discussions that would ensue.  We gathered in the program area, among the grass and trees and met with this young man who indicated he had stories to share with us; and that he only asked one thing of us:  that we commit ourselves to remembering the stories and to sharing them with the world, who needed to listen, to hear and to learn the truth of history, the truth of the dark chapter in the history book of our People.

That young man was Elie Wiesel.  His clear, concise, moving and sincere message remains with me until this very day: Zachor…Remember.

Later in the summer, at the International Convention of BBYO, I was privileged to be elected the 41st International President (Grand Aleph Godol) of BBYO.  Subsequently, following in the footsteps of Hon. Phillip Klutznick and Hon. Jack Spitzer, both of whom had previously served as Grand Aleph Godolim of the Aleph Zadik Aleph (AZA) of BBYO,   I served two terms as President of B’nai B’rith International. During my BBI presidency, the B’nai B’rith Youth Organization, Inc. was created and BBYO, Inc proudly continues the KALLAH program of providing a leadership learning experience in Jewish life and thought.

For fifty years, KALLAH has made, and continues to make, a difference in the lives of its participants, and in helping make this world a better place for all in large measure due to the impact of the training offered through KALLAH and the many other leadership programs of the B’nai B’rith Youth Organization.

*Richard D. Heideman is Senior Counsel of the Washington law firm Heideman Nudelman & Kalik, PC, which represents victims of terror and advocates for human rights.  Heideman presently serves as Chairman of The Israel Forever Foundation, the Hebrew University Faculty of Law Institute for Law and Policy and Chairman of the US Holocaust Memorial Museum Lawyers Committee in Washington, DC. Heideman can be contacted at rdheideman@hnklaw.com.