Under the Guise of Democracy: People are dying as Syria ‘votes’ 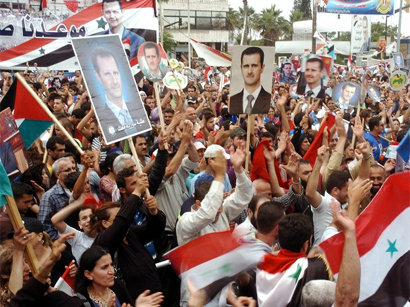 Hafez al-Assad was the brutal dictator of the Syrian Arab Republic, ruling with an iron fist and using the tool of terrorism as a threat against his own people and the world. Succeeded at his death by his son, Dr. Bashar al-Assad, it is clear that the apple did not fall far from the tree.

In the past two and a half years, more than 160,000 people have been killed in Syria and reportedly 3,000,000 have become dis- placed refugees, camping in various neighboring countries, in addition to millions of additional displaced persons.

Under the cover of democracy, Bashar al-Assad called for elections in order to succeed himself as president. Reuters reported on June 5, under the headline “Assad wins Syrian election with dominant 88.7 percent of vote,” that Assad was successful in “securing a third term in office despite a rag- ing civil war.” The speaker of the Parliament announced, “I declare the victory of Dr. Bashar Hafez Assad as president of the Syrian Arab Republic with an absolute majority of the votes cast in the election,” reporting in a televised address from his office in the Syrian parliament.

The article further reported that “Syrian officials had described the predicted victory a vindication of Assad’s three-year campaign against those fighting to oust him.” Notably, “Voting took place in government-controlled areas of Syria, but not in large parts of northern and eastern Syria held by rebels fighting to end 44 years of Assad family rule.”

Also on June 5, The Jerusalem Post reported that “Inspectors overseeing the destruction of Syria’s chemical weapons arsenal have asked President Bashar Assad’s government to clarify dis- parities in its original declaration on its cache of toxic gas,” accord- ing to UN diplomats providing a briefing to the 15-nation UN Security Council on behalf of the Organization for the Prohibition of Chemical Weapons. A June 30 deadline looms for the destruction of all of Syria’s declared chemical weapons, which UN Secretary- General Ban Ki-moon has said will not be met.

As part of a deal reached last year under the sponsorship of Russia’s Putin, who has an intense interest in maintaining Russia’s ties to Syria, giving Russia a key stronghold in the Middle East and a presence on the Mediterranean, Assad agreed to “hand over the country’s entire chemical weapons stockpile and ensure its total destruction by June 30, after hundreds of people were killed in an August 2013 sarin nerve gas attack near Damascus.”

President Obama had threatened, staged, and — much to the chagrin of U.S. allies, particularly France — canceled at the last minute positioned U.S. military naval strikes in response to the worst chemical weapons attack in decades, which is believed to have been carried out by Assad.
The Assad government denies the allegations and blames the rebels for all chemical attacks in Syria, and continues to maintain “enough highly toxic material to carry out a large attack.”

Notably, “officials have cited U.S., French and British intelligence as saying that Assad’s government had failed to disclose all of its poison gas stocks in its original declaration — leaving it with the capability to produce and deploy chemical arms.”
The Jerusalem Post further reported that Robert Ford, former U.S. Ambassador to Syria throughout the civil war, has gone public with “harsh criticism of the Obama administration’s policy on the crisis,” stating that “the State Department and the White House have constantly wrestled one another over the pace of American assistance and training of moderate Syrian rebels fight- ing for the ouster” of Assad. Ford told PBS’s Newshour “we were constantly behind the curve.” Ford continued, “That’s why now we have extremist threats to our own country. We had a young man from Florida, apparently, who was involved in a suicide bombing, and there will be more problems like that, I fear.” Ford said, “The efforts we have made to date have not worked … They have not put enough pressure on the regime on the ground.”

The Syrian Arab Republic was first placed on the U.S. Department of State List of State Sponsors of Terror in 1979 and remains on the list. Efforts to reform Syria’s conduct have proven fruitless, all the talk notwithstanding. Syria supports, and is supported by, the Islamic Republic of Iran, the worst sponsor of terrorism in the world. Syria supports, and is supported by, Hezbollah in Lebanon, which has provided troops to support Assad’s army in efforts to defeat the Free Syrian rebels. Hezbollah has long been used by the Islamic Republic of Iran as one of its main proxies for terror, commit- ting the Embassy of Israel bomb- ing in 1992 in Buenos Aires, and the AMIA Jewish Center bomb- ing in 1994. Repeated acts of terrorism have been launched throughout the world, including against Israel and her citizens, taking lives and destroying the fabric of families for decades. Let us remember that the Syrian Arab Republic remains a threat to the people of Israel; remains the key connection between the Islamic Republic of Iran and Lebanon, with Iranian weapons having been moved with impunity across Syria into Lebanon, staged for launch- ing over Israel’s northern border.

My law firm brought litigation against the Syrian Arab Republic for sponsoring the EgyptAir Hijacking in 1985, and the Rome Airport Attack in 1985, all commit- ted by the Abu Nidal Organization, a foreign terrorist organization. The U.S. District Court for the District of Columbia has found the Syrian Arab Republic liable as a State Sponsor of Terror, assessing judgments of $601 million, $51 million and approximately $3.4 billion, awarded to victims of terror and their families. Experts testified at a public trial in Washington on Syria’s long and sordid sponsor of heinous murder.

With the support of Russia and China at the United Nations Security Council, which recently blocked a resolution of France, Syria has not yet been referred to the International Criminal Court to be held accountable for the terror that Syria has turned on its own citizens.

Under the guise of democracy, Assad marches forward, appear- ing in the press in a suit and tie casting his ballot for continuation of his own reign of terror.

When will the world act to protect the people of Syria: the children, their mothers, fathers and grandparents, whose lives and families will never be the same? The rights to freedom trampled, their human rights obliterated, they deserve a better day. Yet, as the world dithers, people are dying … supported by despots who vote themselves back into office.

Richard D. Heideman is a Washington, D.C. attorney. He is the author of The Hague Odyssey: Israel’s Struggle for Security on the Front Lines of Terrorism and Her Battle for Justice at the United Nations (Bartleby Press; see thehagueodyssey.com). He can be contact- ed at rdheideman@richardheideman.com.