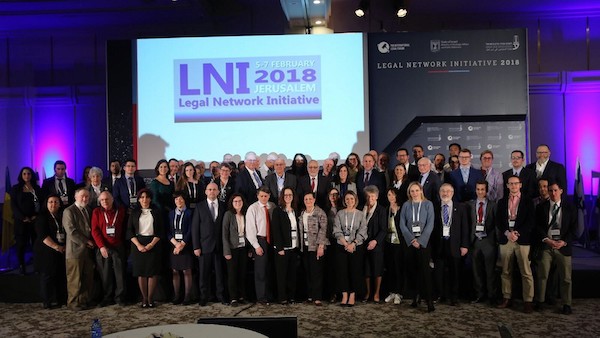 Top legal experts gathered in Jerusalem for a three-day summit focused on countering a global delegitimization campaign against Israel.

(Alex Traiman / JNS) Top legal experts gathered in Jerusalem for a three-day summit focused on countering a global delegitimization campaign against Israel. The first Legal Network Initiative 2018 was organized by the International Legal Forum, an Israeli nonprofit, in collaboration with Israel’s Ministry of Strategic Affairs and the Israel Bar Association.

“This is the first time where over 150 legal experts from around the world are coming together in one room, at one time, for one conversation, and thinking about the next moves, ideas and legal narratives that should be developed to counter both the delegitimization of the state of Israel and the various boycott movements taking place around the world,” said Tzahi Gavrieli, director of the Task Force Against Delegitimization within Israel’s Ministry of Strategic Affairs.

While efforts to delegitimize the rights of the Jewish people to have a state have gone on since Israel’s establishment, the advent of social media has made this more widespread. Israel has only recently started targeting these campaigns on a state level.

“There are two levels: The higher level is delegitimization; the lower is the boycott divestment function,” said Gavrieli. “Until two years ago, boycott, divestment and sanctions [BDS] movement organizers were vocal and active with no boundaries. In the last two years, there has been a major and substantial turning point, whereby organizers of boycott movements now feel that they cannot carry out large and significant steps against Israel.

“These last two years have been very problematic for the boycott movement,” continued Gavrieli. “We have recorded some major defeats on U.S. campuses and other places.”

Conference sessions addressed local Boycott, Divestment and Sanctions movements, actions taken against Israel within the U.N. Human Rights Council and the International Criminal Court. In addition, participants were addressed by Minister of Justice Ayelet Shaked; toured the Knesset and met with Speaker Yuli Edelstein; visited Israel’s Supreme Court, where they were met by Chief Justice Esther Hayut; and went to the President’s Residence, where they were addressed by President Reuven Rivlin.

According to Eugene Kontorovich, a professor of constitutional law at Northwestern University School of Law and a senior researcher at the Kohelet Policy Forum in Jerusalem, the low-level BDS movement on the NGO (nongovernmental organization) level only begins to become dangerous when more respectable bodies adopt their campaigns.

“The level that is pursued by NGOs is relatively unsuccessful because nobody really cares about them individually. But when the United Nations or the European Union adopts those campaigns, then it is much more powerful because it has their support and their imprimatur. BDS is not just campuses. It is the face of economic warfare against Israel,” said Kontorovich.

“It is important for Israel to go on the offensive, instead of being defensive,” said Richard Heideman, president of American Victims of Terror, and whose legal firm has arranged millions of dollars in settlements with government sponsors of terror.

Gavrieli agreed, asserting that the first stage is “to expose the nature of the delegitimization and BDS campaigns as discriminatory hate-speech campaigns.” The Task Force Against Delegitimization, he said, works to accomplish this “with different tools to different audiences in different languages.”

“The second stage is to provide sufficient platforms for the legal network and pro-Israel organizations, and their experts, to work together, communicate and share the values of Israel, and to set a narrative of messaging,” said Gavrieli.

While Gavrieli chose not to divulge the specific nature of the task force’s work on a daily basis or how it measures results, he said that “we are producing [a] methodology that is measuring success. We can see how many boycott motions have been accepted or decided on in 2017.”

“Has it been only our work? No,” said Gavrieli, who notes that several government ministries, including the Ministry of Foreign Affairs, deal with some of the more difficult battlefields, such as the International Criminal Court and the United Nations. “Still, we have an important seat at the table. It is the work of many organizations.”

Gavrieli added that he hopes the efforts of the task force—and conferences like the International Legal Forum—will be a game changer in how delegitimization efforts are identified and then countered through legal means.