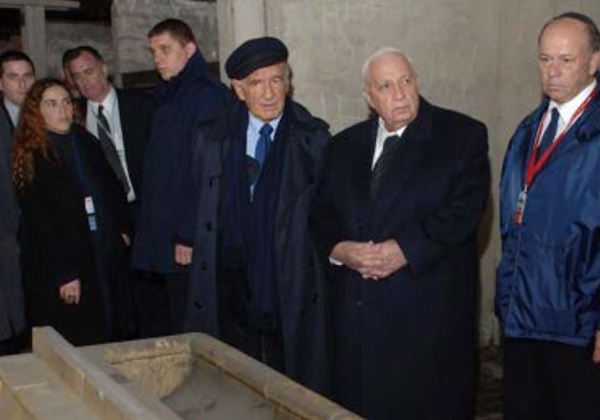 Dr. Shmuel Rosenman has a clear and concise message to European and world leaders concerning the growing incidence of antisemitism – it is time to act.

He has become increasingly alarmed over the last five or six years as renewed antisemitism has made news headlines and Jewish lives feel more precarious. It is impossible to lead the International March of the Living and not be acutely aware and sensitively attuned to the dissonance of hatred.

The world’s oldest hatred has metastasized; it has become not only an attack on Jews as Jews, but viscerally despising of the world’s one and only Jewish state – Israel.

“Antisemitism is on the increase in Europe,” said Rosenman. “More than 72 years after the revelations of the atrocities of the Shoah, we are witnessing an uprising of antisemitism. In Europe, this often manifests itself as extreme hatred toward the State of Israel.”

Warming to his theme, Rosenman added that the March of the Living is the embodiment of an educational experience, of being able to see, with the aid of first-hand witnesses, the crimes against humanity perpetrated against the Jewish people. But he also sounded a note of caution and reflection: What happens when there are no more survivors left? This is one of the reasons that March of the Living has invited education ministers from EU countries to take part in this year’s event. It will provide an opportunity for ministers from Austria, Poland, Portugal, Hungary, Lithuania and others, to take what will be more than just a symbolic journey. Think about those countries.

We could legitimately ask each of them: Where are your Jews? What did you do to protect them? The chairman of the International March of the Living is gratified, though, that so many EU education ministers will be in attendance.

“As the number of survivors diminishes annually, we must turn our attention to how we teach the Holocaust to the generations to come. This is the theme of this year’s March of the Living. We must be sensitive, but clear-headed enough to know that within a relatively short period of time, the witnesses to these crimes will no longer physically be with us.”

Over the past 29 years, around 250,000 participants have walked from the gates of Auschwitz to Birkenau on the March of the Living – Jew and non-Jew, students and adults, survivors and political leaders – from more than 50 countries.

Each year, these marchers commemorate more than a million people – the vast majority of them Jewish men, women and children – who were murdered, many on their arrival to the death camp.

“On this march we insist that never again shall we be silent when innocent people are being slaughtered,” says Rosenman.

“Whether they are our brothers and sisters or members of any other nation, race or religion, the lesson is universal.

“Yet we look around the world today and see that our work is not yet done.”

Rosenman considers the march and its surrounding events an international educational program, bringing together young people and adults from all over the world to learn about the history of the Holocaust and Jewish life in Poland.

““The participants on our marches symbolize the stark contrast to the actual Death Marches during which countless numbers of Nazi victims were forced to take toward the end of the war, in which hundreds of thousands perished,” explains Rosenman. “This time, however, there is a difference. It is the march of the living – during which participants march with their heads up high, affirming that intolerance no longer has a place in our world.”

According to Rosenman, who received his doctorate in education administration from Penn State University, and today teaches economic and health policy at Bar-Ilan University and Ashkelon Academic College, the program has several goals.

First is to pay tribute to the courage of those who survived the Holocaust and rebuilt their lives despite the haunting memories of the past. Participants are thus the bearers of their memories – the witnesses for the witnesses.

Second, to never again allow for the unchecked rise of antisemitism or other kinds of discrimination against a single racial group.

Third, tikkun olam – the Jewish concept of improving the world – is meant to remind students of the responsibility to be a light unto the nations and reach out to people of all cultures.

And fourth, to enter into history by visiting Eastern Europe.

Young students, says Rosenman, take part in this commemorative act demonstrating to the world that the death of six million Jews has registered and will never be forgotten by the Jewish people.

“The March of the Living has two parts,” he continues. “One week in Poland, and one week in Israel. The idea is to go from destruction to rebirth – to understand the importance of the existence of Israel as the spiritual center and homeland of the Jewish people.”

He is sanguine, but proud of the March of the Living’s enduring appeal.

“If a program runs for 29 years and every year more and more people seek to join, you must be doing something right,” says Rosenman. He attributes part of this success to keeping the educational message relevant and fresh, and by avoiding repetition. Perhaps this year, with the emphasis on carrying on the message of tolerance, acceptance and teaching the Holocaust without its primary resource, it will act as a further spur to participants young and old to keep the flame of remembrance burning.

The March of the Living is not only about the visits to camps in Poland. In February, it co-sponsored, with the International and Comparative Law Review and Loyola Center for the Study of Law and Genocide, a Holocaust Educational Symposium on the Nuremberg Laws and the Nuremberg trials – held at Loyola Law School in Los Angeles. Several high-profile thought leaders attended the symposium, including:

• Professor Stanley Goldman, legal scholar and founding director of the Center for the Study of Law and Genocide at Loyola Law School

• Professor Michael Bazyler of Chapman University Fowler School of Law, author of 2016 Jewish Book of the Year Holocaust, Genocide and the Law

• Professor Jonathan Bush, lecturer in law at Columbia Law School and one of the founding general counsels at the United States Holocaust Memorial Museum

• Hannah Bryce, assistant head at the International Security Department at the Chatham House

• Dydine Umunyana, survivor of the Rwandan Genocide and author of Embracing Survival.

Participants discussed the Nuremberg Laws within the context of better understanding the consequences of state-sanctioned hate. Contemporary parallels were drawn with state-sponsored terrorism, including those of the Islamic Republic of Iran, as well as attempts at genocide in Darfur, Rwanda, the former Yugoslavia and Syria.

However, it is the visit to Poland and the subsequent trip to Israel that has had a significant impact on the students who have participated in it. Alumni return to their college campuses, schools and communities and become fervent ambassadors for the life-affirming and life-changing experiences they witnessed.

A follow-up survey conducted by the organization found that more than 80% of Jewish participants said their sense of Jewish identity and motivation to participate in activities within the Jewish community increased after the program.

Virtually all respondents – 95% – felt that the March of the Living left them well prepared to counter the claims of Holocaust deniers. Moreover, 91% agreed that confronting antisemitism became even more important to them after the trip. In the area of human rights and feelings of tolerance for other groups, 87% felt that their understanding and personal sensitivity increased.

Rosenman insists that the program’s participants are very aware of the current situation. The fact that half of them are not Jewish is important in helping spread teaching about what antisemitism, fascism, and racism can do to the Jewish people and to societies at large. Even if they have not heard him speak, perhaps this closely echoes former Chief Rabbi Lord Jonathan Sack’s maxim that “what starts with the Jews, never ends with the Jews.”

“Most people today, even if they’re not deniers, they are bystanders,” explains Rosenman.

“We want to teach that you shouldn’t be a bystander. You should be active – taking action by law and action by intervention. To be a strong force against antisemitism anywhere in the world.

Our slogan is – witness the past, ensure the future.”

To this end, Rosenman recalls something that writer and Holocaust survivor Elie Wiesel once said to the young people in Auschwitz-Birkenau on the 1990 March of the Living: “We were convinced that antisemitism perished here in Auschwitz. It didn’t end here. Its victims perished here.”