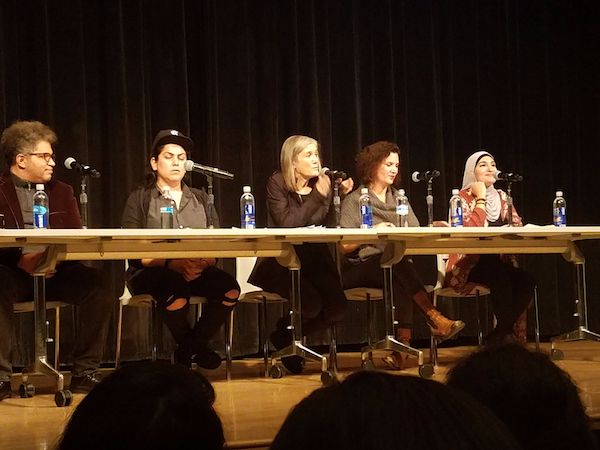 Tuesday in New York City told a tale of two anti-Semitism panels. The first was a buttoned-up afternoon symposium in a minimalist midtown law office entitled “Anti-Zionism=Anti-Semitism.” The second, “The Uses and Abuses of Anti-Semitism,” was a jolly evening affair at the New School where, as you might expect, students predominated.

These two mirror image events of November 28 were addressing their respective appreciative audiences. But in a way, they were also speaking to each other. Jewish Voice for Peace, which dominated the second panel, came up at the first multiple times as a potential danger; meanwhile, the Zionist Organization of America and even the Anti-Defamation League – a member of which was on the first panel – were mentioned at the second. Fittingly, the members of each panel seemed to think that the biggest threat to the Jewish people was coming from the panel they were not on.

The afternoon symposium, organized by the American Zionist Movement, featured Kenneth Jacobson, the Deputy National Director of the Anti Defamation League, and Ira Forman, a former US State Department Special Envoy to Monitor and Combat Anti-Semitism. The vast majority of the panelists were convinced that anti-Semitism would never go away, and the audience – including a delegation of municipal officials from Israel – seemed to anxiously agree.

The average age of the panelists at the evening event was 25 years younger than in the afternoon. The evening panel was organized by the far-left Jacobin Magazine at the New School, in Greenwich Village, after a petition garnering 21,000 signatures to have it canceled failed. It featured Rebecca Vilkomerson, director of Jewish Voice for Peace, and Linda Sarsour along with two Jews of color, Leo Ferguson of Jews for Racial and Economic Justice, and Lina Morales of JVP.

What I learned from these two panels is that anti-Semitism in 2017 is a new kind of currency. The question of who is targeted by anti-Semitism, who is perpetrating it, and even who gets to define it, is a game of political dodge ball that older and younger generations of Jews are playing against each other. Less and less able to engage in dialogue, each accuses the other of not only forgetting the Holocaust, but of setting up the conditions for a new one.

AZM’s panel on anti-Semitism began with an address by its president, Richard Heideman, stating the purpose of the event.

“We gather here in the backdrop of history to examine how is it that we the Jewish people have come to this point in 2017, having invested billions and billions of precious dollars in fighting anti-Semitism, in educating our young people, in standing up for the right of Israel to defend herself, how is that we have come to a point where some believe today anti-Semitism is more rampant than we have seen in modern time, more dangerous, more vicious than we have seen in modern times?” He asked.

Evidence of these dangerous times was provided by Yaakov Hagoel, vice chairman of the World Zionist Organization, who spoke in Hebrew of an uptick in violent anti-Semitic activity across the world. “It’s been a tough decade,” he said. “It’s a decade in which it’s harder to be a Jew in the diaspora. It’s harder to walk around with Jewish symbols in the diaspora. It’s true, it’s harsher in Europe. But we have no doubt that what’s happening in Europe is a wave that will influence the entire world.”

The causes of this uptick are economics… and Islam, Hagoel said. And these can both be combatted with one thing: what he called “Jewish pride.” “I have no doubt that if we raise our heads with Jewish pride, we will succeed in dealing with this anti-Semitism.”

Islam recurred as a primary culprit in the speakers’ comments. The only panelist to receive applause during his remarks was a man named Yossie Hollander, whose bio read “philanthropist and activist” and who argued that anti-Semitism on the right and on the extreme left aren’t the real danger. “What starts worrying me is the penetration of anti-Semitism to the mainstream left in the United States,” he said. “It’s all coming from one source: Islamist anti-Semitism, which is the source of all of it.”

But Islam wasn’t the only culprit. Also repeatedly mentioned was JVP itself. Forman told a story from 2004, when JVP asked the State Department to get rid of the definition of anti-Semitism because it hinders free speech and harasses Palestinian activists. “I was proud to say, that the Department answered, no we will not,” Forman said.

ADL’s Jacobson also brought up JVP. But Jacobson allowed that some criticism of Israel is valid and not anti-Semitic. In fact, he went further than that.

Specifically, JVP’s new book “On Anti-Semitism” argues that it’s impossible for the left in its criticism of Israel to be anti Semitic, because all they are talking about is human rights violations, Jacobson said (JVP disputes this summary of the book, which they say acknowledges that criticism of Israel can be anti-Semitic).

The ADL’s task is to make the proper distinctions, says Jacobson, and calling out JVP is part of that task.

Even calling out the JVP panel on anti-Semitism was part of that task, as ADL director Jonathan Greenblatt exhibited when he tweeted about the event:

But making these distinctions – between friends of Jews and foes of Jews – was a central theme of JVP’s panel, too. From the point of view of these panelists, calling anti-Zionism anti-Semitism obscures the true threat of the white nationalists and the “alt-right.”

Vilkomerson took it one step further. “I am angry at the profound hypocrisy of the institutional Jewish community,” Vilkomerson said. “If the past year has taught us nothing else, it has taught us that loving Israel does not mean that you love Jews. In fact I’d argue that we are seeing an especially virulent Trumpian form of Zionist anti-Semitism.”

She mentioned the ZOA’s recent gala, which feted Steve Bannon, executive director of the “alt-right” site Breitbart, and Sebastian Gorka, despite his problematic ties to a Hungarian nationalist group that is banned in America. Vilkomerson called the ZOA gala “only the most recent and the most egregious example of Jewish institutions embracing rabid anti-Semites solely because they are Zionists.”

Indeed, it’s not just a right wing phenomenon, Vilkomerson said. “The less extreme version is when Jonathan Greenblatt or Bret Stephens in the pages of The New York Times create litmus tests and make false equivalencies between organizations like JVP and the so called ‘alt-right,’” she went on. It’s dangerous, unethical, and inaccurate, she said, because “it minimizes the true fight against anti-Semitism we all need to be waging.”

“The institutional Jewish community has thus abdicated their responsibility to fight anti-Semitism,” Vilkomerson said. “They’ve traded it for support of Israel.”

Sarsour also addressed a few other issues, most notably, her comments in a JVP video about anti-Semitism not being systematic, which got a big backlash. “Of course, anti-Semitism was institutionalized in places like Europe, which is why they ended up having the Holocaust; no one is going to deny that anti-Semitism historically has been institutionalized,” Sarsour said on Tuesday. “What I was saying was it’s not written into the law, into the criminal justice system the same way that anti-black racism is or xenophobia is, or Islamophobia.” A white Jewish person will not experience the criminal justice system in the same way as a Jew of color, or a black person, Sarsour said.

(Vilkomerson took it one step further. “It can be true that anti-Semitism is a real issue,” she said, “and it can be also true that for those of us who are white Jews, we’re not experiencing structural anti-Semitism in the way that black people in this country are.”)

But despite coming at anti-Semitism from opposite points of view, the panels shared something crucial. Both the members of the first panel and the members of the second panel seemed to see in the other the cynical manipulations of political actors, willing to throw Jews under the bus and ignore the real anti-Semites to pursue an advantageous coalition. For the AZM, JVP and Sarsour are willing to embrace the anti-Semites of the left and even what they see as anti-Semitic tactics like BDS to criticize Israel, whereas for the folks on the JVP panel, what was criminal was the right wing embrace of Gorka, Bannon and his “alt-right” neo-Nazis in exchange for pro-Israel sentiment.

I asked Rabbi Alissa Wise, Deputy Director at Jewish Voice for Peace, if there was no way she could imagine that her critics were operating in good faith, driven by a true fear of anti-Semitism. “At this point, the attention that Linda Sarsour has gotten has gotten so outsized that at this moment, it doesn’t feel like it’s inside the realm of what’s a reasonable fear,” she told me. “While there may truly be some fears, they’ve gotten so out or proportion that they can no longer be dealt with reasonably.”

I reached out to ADL to ask them the same question, whether they could imagine the possibility that JVP was sincerely attempting to grapple with the issue. “I think their focus on anti-Semitism is built off of a desire to separate anti-Zionism and anti-Israel equations with anti-Semitism,” Betsaida Alcantara the head of communications of ADL, explained in an email. “We know firsthand that it is absurd to suggest that any criticism of Israel is anti-Semitism. On the other side of the coin, however, it is equally absurd to suggest that criticism of Israel can never qualify as anti-Semitism. And alarm bells go off when we hear this baseless claim, because it belies the facts that we see every day.”

As for the developing feud between ADL and JVP, “ADL’s mission is to battle anti-Semitism wherever its source,” Alcantara explained. “It would be irresponsible for us to not call out the fact that JVP is one of the leading anti-Israel groups in the country, whose leaders employ rhetoric that is sometimes difficult to distinguish from that of avowed anti-Semites.”

Perhaps most fascinating is that in the post-modern debate about anti-Semitism, the chief culprits for both sides are people who insist they aren’t anti-Semites but rather love Jews.

And in that sense, we Jews are winning.

Batya Ungar-Sargon is the Opinion Editor of the Forward.